It has not been your typical winter here in the L-C Valley this season. We got snow in the early part of December. Not a great deal of it, mind you, but enough to cover the ground, soften the noise, make getting around a little interesting and enough to give us a winter wonderland we don’t normally experience. Then it got cold and stayed that way, so the snow lingered through Christmas. As if this wasn’t enough, our little community and Lewiston, Idaho in particular, has now become somewhat famous. You see, a little bird landed here sometime in December that has caused quite a bit of craziness as of late and turned our normally dull, gray winter days into subtle shades of olive green, orange-yellow and beautiful blue.
As the story goes (and you may have heard it by now) a local birder was doing a raptor survey in Hell’s Gate State Park on Dec. 26th. Somewhere in the process of that he found this little bird in a stand of Russian olive trees along the river. What caught his attention was the flash of blue, though she was not marked like any bluebird he knew of. Curious, he spent the next few hours trying to get a photograph to try and put a name to this unusual bird. As it turned out the only bird that fit was one called a red-flanked bluetail. And that’s when things got really interesting!
In the world of bird watching occasionally a bird will turn up in a place that is out of its normal range. They have wings after all, and can and do fly great distances, sometimes thousands of miles during migration. Sometimes, however, they get turned around, blown off course by a storm or maybe they just decide to see some place new and end up in our backyards. That’s called a “rare bird sighting” and if it’s reported to such places as E-bird on the internet, bells and whistles and whiz-bangers go off in cyberspace and a rare bird alert goes out. Those of us that follow that sort of thing get a notification that says, “RARE BIRD! RARE BIRD!” and all of our good sense flies right out the window as a form of madness sets in. We must see this bird! Right away! Don’t delay!

Within hours of it being reported good folks from all over were hearing that a red-flanked bluetail had shown up in Lewiston, Idaho. She (the bird is female) was not supposed to be here. She was very, very far off course and was, in fact, supposed to be wintering somewhere in South East Asia, some place warm, not someplace like Idaho in the midst of a kind of winter we haven’t seen in a while. Also within hours of the report those same good folks were jumping in their cars and driving long distances on treacherous roads, through nasty winter weather to get a once-in-a-lifetime look at this rare beauty. Birds like her had only been recorded in the lower 48 states about three times and NEVER this far inland. She was a rare bird, indeed. 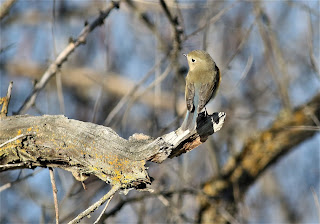 The first few days of her sighting were crazy. Despite the bad weather dozens of people were showing up every day. They came with binoculars, spotting scopes and cameras of every make, model and size to get a glimpse and a photographic record of her being here. They were coming from all around the Northwest at first, then, as she lingered, they started coming from all over the country. Large groups of people could be seen staring intently at the tangle of Russian olives she had chosen to hide in. At first, she was quite shy and would only come out of hiding briefly. When she did those same groups of people would scamper back and forth jockeying for position for the best views and photo ops. I’m sure from the birds’ perspective it was quite amusing to see what she could make us silly humans do.

She has been here nearly two weeks now and has been seen by dozens of bird watchers and nature lovers from all over. There’s a path worn in the snow to the spot she stays in and she is getting more used to her multitudes of admirers, coming out to pose on a branch in the sunshine or foraging for insects and Russian olives along the river’s edge. It has been great fun to host her, to be able to meet with and talk to in person some people you’ve only known from interactions you’ve had over the internet. As we pass one another from the parking lot to her sanctuary the question is, “Have you seen the bluetail today? Is she still here?” Then come the questions of whether we’re local people or what part of the country we’ve traveled from, introductions and hand-shakes and “so YOU’RE Catherine! I’m Ben, Blair, Paul, Maire" (or whomever else I’ve met and I’m glad to have met you in person!).
Interesting how one little bird can change so many things, from brightening up a dreary winter landscape to bringing people together from every political, economic, or educational background. We’ve happily come together and forgotten all our differences to share a common interest and focus on a rare little lady.
Is this madness? Yes. Bluetail madness!
And I hope it lasts.
Posted by Catherine Temple at 6:30 PM