Just wanting to let my readers know that in the near future I will be making some changes. I am currently in the process of building an official website that will better showcase my art and, hopefully, will also allow me to continue my blog posts all in the same location. Those of you that follow this blog may get lost in the process (I hope not, but apologize if you do). I will be switching this domain (currently www.catherinetemple.com) to the new website and this blog will go back to www.catherinetempleart.com.

I am hoping to have the new website up and running by the end of the month. It's been bouncing around in my brain for some time and I finally decided to just do it. The process has been time consuming and humbling with several false starts, but I think I've finally settled on a hosting platform that will work. So, the next time that you type in that domain it should take you to the new site.

Thank you for following this blog and hopefully I will see you at the new one soon! Happy Spring!
Posted by Catherine Temple at 11:30 PM 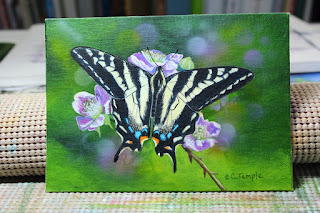 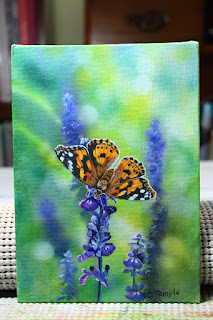 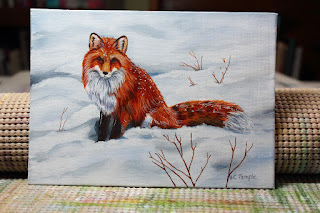 Happy New Year everyone and Welcome 2018!

It's hard for me to believe that a whole year has come and gone already! This past year was a wonderful adventure filled with exciting opportunities, new friends, great successes and some challenges. I pushed myself harder than I have in years to reach my goals and was rewarded for my efforts. I feel pretty good about that. Now we're looking at a new year ahead and I'm working at formulating a new plan. At this point the plan is a little vague since I don't have a show or other major event that I'm working towards, but that can always change. The year is still young.
To start off 2018 I am working on ten small paintings that are going to a fundraiser for Valley Art Center in February. These mini-paintings, only 5" x 7", are giving me a good opportunity to experiment a little. I got a new airbrush for Christmas and I'm practicing, on a small scale, with soft focused backgrounds. As I have been working more in acrylics lately achieving this look with a brush is challenging as the paint dries quickly making it hard to blend. An airbrush can help to create that softer background and give the painting a sense of depth. Learning to airbrush isn't without its challenges though and you can easily overdo the look, but it's fun to try some new things.

The show is called "A Heart for Art" and will feature the works of several talented artists. Each painting will be for sale for the small price of $40.00. The opening reception will be Friday, February 2nd from 4 - 7 p.m. and will run through the end of February, however that first night will give you the best selection and it's usually pretty fast paced with paintings nearly flying off the walls.The show is designed for patrons to be able to take their purchases home that evening and a framer will even be on hand with pre-made frames. It's sure to be a fun event so please plan to come if you can.

Well, 2018 is off to a flying start! Guess I'd better get back to work as February will be here before I know it. Here's hoping 2018 is a good year for everyone!
Posted by Catherine Temple at 11:00 AM