I have an obsession.
A Snowy owl obsession.
Still!
Just when I thought I was cured by sighting one last month I took a drive back to the area where they were first located. I have been to this area numerous times lately and have always been skunked.....but not today. Today, the Creator of all things feathered smiled upon me and granted me not one more sighting, but two!
As I ventured out this morning I still held some vague hope that this would be the day to see another one, but had made up my mind to accept whatever came across my path and be satisfied. I drove to the same area and scanned the fields for this illusive bird and saw....horned larks, northern harriers, ravens, all moving rapidly by as the wind was howling across the flats. I spent some time watching a rough legged hawk hang motionless, head into the wind, a marvel of aerodynamics, but no snowy owls were visible.
I finally reached the designated cross roads where the owl had been seen and as I turned up the road my mind and eyes drifted off to the distant, snow covered  Blue Mountains. Suddenly something large and white zoomed in front of my truck from right to left. Caught daydreaming, it took me a few seconds to register what it was. SNOWY OWL!!!
I slammed on the brakes and grabbed my camera and fired off a few shots as it drifted quickly across the field. I held my breath as I watched to see if it would land and when it did I wheeled my truck around and tried to maneuver for more photos. The owl and I played a game of tag for several minutes with me taking photos whenever I could.  It led me in a wide circle and finally coming back to the start of our encounter, sailed over the field and out of sight. That's when I saw it....SNOWY OWL #2.
Sitting just up the road in the snow filled ditch was a second owl. It was tucked between some weeds and a rock and in the snow so it was nearly invisible. I crept the truck slowly forward and got out to take some photos again. It didn't stay long and rose into the wind and quickly zipped past me flying to a wood pile some two hundred yards into the middle of a field. Figuring my photo shoot was done I pulled the truck over to watch it for a few moments with my binos, but the show wasn't over yet. Like a feathered stealth fighter jet, owl #1 rocketed low across the field and attacked owl #2. I had seconds to see it coming and barely enough time to get the camera pointed on the action.
The showdown lasted only briefly and the reason for the attack is unknown, but it was spectacular to witness. I have posted more photos of the tussle on my Flickr site, http://www.flickr.com/photos/ctemple/6778739205/in/photostream/.
After it was all over I decided it was time to leave these two white warriors to their hunting. The encounter was more than I had hoped for and for one more day has fed my obsession. But.....there's always tomorrow!

Posted by Catherine Temple at 9:23 PM 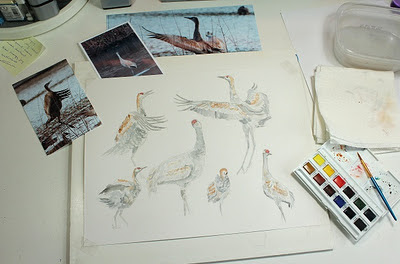 I have been having a great time lately, pursuing the many interesting birds that have been sighted near my home. So far this year I have already seen 45 different species, many of them within minutes of where I live. First there was the Snowy owl obsession, then there was a Gyr falcon (which I still haven't seen) and now there is a Sandhill crane visiting Swallows Park which is just a few blocks from me. While Sandhill cranes are not totally uncommon for Washington, they are rarely seen in Clarkston, so when this bird was first sighted you can bet I was on my way to the park with camera in hand to see it for myself.

So far this year this crane seems to be my good luck bird. I have been able to locate it most mornings when I go for my walk. It hangs out on a small island with a bunch of Canada geese and seems to come and go with them. I have been taking numerous photographs (thank God for digital!) and have begun making sketches of the various poses I've been able to capture with the intention of creating a painting at some point.

Whenever I see a new bird I try to do some research and learn more about it. Sandhill cranes are fascinating in many ways. I learned that they are an old species in that there are fossil records showing that they have not changed in millions of years. Their tertial feathers droop over their rump and form a sort of "bustle". The coolest thing about them is that they dance. They have an elaborate courtship display that includes bowing and leaping into the air. The bird at my park gave a bit of a demonstration one day to my surprise and delight. Though it wasn't displaying to a potential mate the "dance" was every bit as exciting to witness. It was being harassed by some gulls and began leaping into the air after them, fluffing out it's feathers and trying to make itself as threatening looking as possible. Interesting how many of the poses resembled those of their mating dance!

Many people are in love with this bird species and folks flock to Sandhill crane festivals around the country during times of migration to witness the spectacle of the cranes doing their mating dances. I'm hoping to find one near me this spring, but in the mean time I will enjoy the antics of the one in my park. If you'd like to see more of my Sandhill crane photos you can visit my Flickr site, www.flickr.com/photos/ctemple/.
Posted by Catherine Temple at 8:37 PM 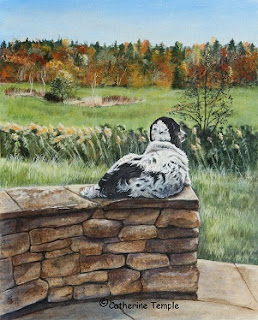 I recently had the opportunity to create this pet portrait for one of my repeat clients. It's not the usual pose for most portraits, but after reviewing photos and discussing the dogs personality we decided to go with this concept. This is one of Stella's favorite things to do...lay on her wall and look out over her domain. When Stella is gone this is what her owners will most remember about her, so while it doesn't show her loving face it does speak volumes about who she was and it will tug at their heart strings.

The portrait is a composite of several photos of the dog, the wall and the field in different seasons. One of the biggest challenges when working with several photos is trying to get the lighting right. Often times the photos are taken at different times of day or some on cloudy days and some in sunshine. The light may be coming from the left, right, straight on, overhead, etc. so it's important to blend them all so it doesn't appear the subject lives on a planet with more than one sun.

I painted Stella's portrait in acrylics on illustration board. The wall was one of the more enjoyable parts as I spattered paint with a toothbrush and applied some with a natural sponge to create the stone texture. Several warm and cool glazes or washes were applied over that to further bring out the texture though it's hard to see in the photo. Stella was also created in several layers and there are touches of lavender, blue and yellow in her coat to reflect her surroundings and give an otherwise plain black and white coat some punch.

Stella's portrait has been approved and is on it's way to Vermont to be given as a special birthday present. Pet portraits make unique and memorable gifts for all occasions. It is always a privilege to create something like this for my animal and pet loving clients. Perhaps you have a special occasion coming up and would like something out of the ordinary to give to that special someone. All it takes are some good photos and a little information and I can create that treasured gift for you. I'm always just an email away! You can contact me at ctemple99@gmail.com. I'll be waiting to hear from you!
Posted by Catherine Temple at 7:06 PM