Late in April a bird watching friend, Jerry, found a young pair of Cooper's hawks that had started to build a nest at a nearby park. Knowing that I like to observe and study nesting birds he let me know the location. He thought this one would be particularly important to watch as both the male and female were first year, sub-adult birds. In other words, they were last years hatch, hadn't attained adult plumage and may not be sexually mature. None the less, the pair were setting up housekeeping and had been seen mating. Time would tell if they would be successful.
My first visit to the nest was May 6th. The nest was high up in a sugar maple and easy to find because the pair had chosen to build on branches that had some mylar balloons hanging from them. It was also clearly visible from the ground without a lot of leaves or branches obscuring the view. On that day I was fortunate enough to catch the male bringing sticks to the nest. I watched as he flew to nearby dead trees and broke off twigs with his beak, then transferring them to his feet he would return to the nest. 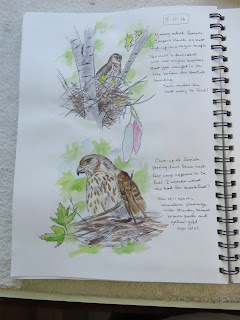 The female, according to Cornell Lab of Ornithology, doesn't do much of the nest building, but I did observe her on the nest and rearranging twigs to her liking. It also said that the male calls before approaching her so that she knows it's him and she doesn't mistake him for prey. Males are about a third the size of females, closer to the size of the birds that she might eat.
Once the nest was built the waiting began. There was not much to see for about a month as she incubated the eggs. Toward the end of June I started noticing her standing on the edge of the nest and reaching into it. I suspected at that time that the egg/eggs may have hatched, but just when, I couldn't be sure. 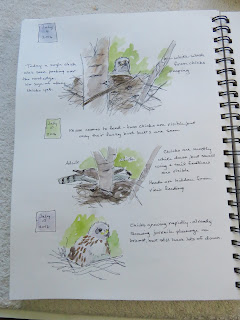 Then, on July 4th, I saw the first fuzzy white head peeking over the edge of the nest, but just one. Cooper's hawks lay from two to six eggs and I had no way of knowing how many there might be nor exactly how old they were. Once hatched they take about another month to fledge.

By the 17th of July I had seen two chicks and they were already starting to feather out. Vertical striped feathers appeared on their breasts as well as wing and tail feathers, while the rest of them remained covered with down.They were very mobile and one even made a leap to a nearby branch. I guessed that it wouldn't be long before they left the nest.
One of the days I visited the male had brought a freshly killed bird though he didn't bring it to the nest. Instead, he cached it for the female to find and take to the chicks. His plumage was changing just as the chicks had been changing. He was molting into the steely blue of adulthood and his feathers looked like patchwork, some brown and some gray.
(Adult Cooper's hawks have steely gray backs and tails, rust barring on the breast, a black cap and piercing red-orange eyes.)

On July 22nd I checked the nest and it was empty. Just like when the little hummer left I felt a sense of disappointment because I again had missed that special moment. I started looking around the trees nearby to see if I could locate the fledglings and could hear soft calling coming from the nest tree. Soon I located the smaller bird. It regarded me with curiosity as I moved around the tree looking for it's nest mate. Then I saw it fly, a nice flap and glide to some other branches, appearing to follow me around the tree. It made me smile to see it learning to use those magical wings, knowing that very soon those wings would be able to maneuver it through branches and fences and other obstacles without the slightest effort. It was fully feathered in juvenile plumage except for a few white tufts of down sticking out here and there.
In spite of it's juvenile plumage and downy tufts there was a fierceness in it's eyes that all Cooper's exhibit. Here was a modern day, feathered Velociraptor that would soon be striking fear in the hearts of songbirds and squirrels as it learned to hunt for itself. The thought made me smile as I've seen these birds blast through my yard after my feeder birds and it's always heart stopping. 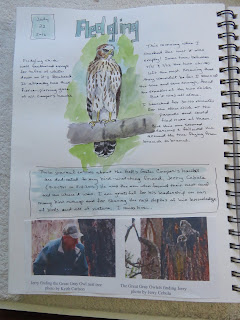 As I finished up my sketches and notes on this nesting adventure I thought of my friend, Jerry. He lost his battle with cancer two days before I first started to watch the nest. He was an amazing outdoorsman and knowledgeable bird watcher, who led our birding trips for the Canyon Birders. He would have enjoyed watching the progress of these two young Cooper's hawks and would be glad to know that they were successful. I feel honored that he chose to tell me the location of the nest and charged me with observing and recording the process. He said I would learn a lot and he was right. I have dedicated my journal pages on these Cooper's hawks to Jerry. I will miss his insight and passion for all things wild.