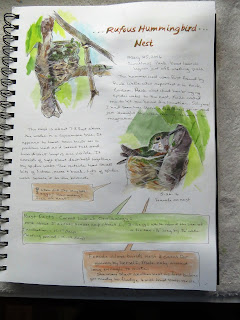 For the past several weeks I have had the unique and rare blessing of monitoring a hummingbird nest. The nest was found by some bird watching friends who let me know where it was so that I could observe and document the activity. What a wonderful adventure it has turned out to be!


The bird is a rufous hummingbird and she chose a beautiful sycamore tree by the river with a branch hanging over the water. The nest was about at eye level from a walking path and in plain view if you knew where to look. Over the course of a few days my friend observed her bringing nesting material and binding it all together with spiders webs. The female alone builds the nest and tends the young. Once the male mates with her his duties are done and he is off to do whatever male hummers do when they are not mating.
I started watching her on May 25th after the nest was built. It is tiny, about 2 inches across and is made of soft plant material, lichens and moss and held firmly together with lots of spiders webs. They normally lay 2-3 eggs about 1/2 inch long and it takes 15 -17 days for those eggs to hatch.
I visited the nest nearly every day to take photos and just watch. Though I dearly wanted to see into the nest I never took the chance of disturbing her to see how many eggs she had and what they looked like.
Then on June 20th I observed something pointy sticking up out of the nest, but only one.
Obviously, by this time the chick was maybe about a week old, big enough and strong enough to raise it's head out of the nest to be fed.


By June 23rd the chick was moving about the nest and growing rapidly. It was covered with tiny, spiky pin feathers and Mama was bringing food about every 15 minutes to her hungry chick. She fed it a protein rich diet of tiny insects and nectar.
Every day I would visit from 15 minutes to an hour. I would wear camo or olive green or brown colors and tuck myself up against a tree so as not to disturb them too much. It was great fun and I would totally lose myself in their world of buzzing insects, birds calling from nearby trees, fish jumping in the river and people walking by not more than a few feet from me that never indicated they even knew I was there. Nor did they know of the tiny wonder that was napping in it's protective nest, rocking in the gentle breezes over the water. So many miraculous things we miss in this world because we just don't pay attention.
By June 27th the chick had tiny flight feathers that looked like thin shafts with paddles on the end. It would stretch and scratch, preening it's new feathers that probably itched as they grew. By the 29th those feathers had grown at an incredible rate and after feeding it would have a burst of energy and start vigorously flapping those tiny wings.
Mama was still bringing food though she would stay away for longer periods of time.
It was astounding to me just how fast this chick was growing. It was nearly as large as the female and I knew it wouldn't be in the nest much longer. References from the internet and my bird books indicated that the chicks are ready to fledge in
15 - 19 days and we were fast approaching that time.
On July 1st I noticed a change in Mama hummers behavior. When I visited she was staying very close to the nest often perching just above it. The chick watched her intently. I knew it was almost time and spent nearly two hours there watching and waiting. I didn't want to miss the moment when the baby left the nest if it was at all possible.
The female flew around the nest catching insects and the chick watched her. At one point she flew in and fed it, then poked it a few times with her beak as if to say, "It's time!"
Though the chick would beat it's wings rapidly and teeter on the edge of the nest it did not leave. Every time it came up out of the nest my adrenaline started pumping and I was sure I would get to see the precious moment when it first took flight on those magical, tiny wings, but then it would settle back down and take a nap. As much as I would have loved to stay longer I eventually had to pull myself away, but I checked periodically throughout that day and the chick was still there.
On July 2nd I was at the nest by 7 a.m. As I drove up I could see the nest and all was quiet. It was empty, the little hummer was gone. My heart sank. I had missed it fledging.
I hurried down to the shoreline looking for some sign of it. I had a fear that as it took that first uncoordinated flight out of the nest that it would somehow end up in the water below. I checked the water, checked the shore and checked the bushes and plants below the nest. Nothing.
My heart sank lower.
Then I remembered something some new bird watching friends told me. "Look for the female and she will lead you to the chick after it fledges." So I wait, watch and listen, scarcely breathing and praying for one last encounter to know all is well. There's a whirring sound above my head and sure enough there's the female. Up she goes, way up near the top of the tree! I back out of my hiding place to get a better perspective and there perched on a branch high above me, highlighted in the morning sun and surrounded by glowing green leaves is the baby hummer! It looks down at me as I marvel at how high it has gone!
I am now flooded with emotions of all kinds...delight, happiness, relief, some sadness, but lots of hope, too. It has been an awesome, educational and inspiring journey with this hummingbird family. I am blessed beyond measure for being able to witness it.
With tears of joy I watch it happily beating it's tiny wings.
"Look at me, I can FLY!"
Knowing I will probably never see it again and that it faces a lot of danger ahead as it continues to grow and then makes a journey of thousands of miles on migration, I speak a prayer and a blessing over it for a good, long life and it's safe travels. Then I leave it to it's life and I return to mine with my heart filled with a hope I didn't have before.
Thanks, little hummers, for letting me share this magical time with you!