A few weeks ago I took a drive to find a common nighthawk that was seen roosting on a fence rail. It was a long shot that the bird would still be there, but being a crazy birder and never having seen a nighthawk that wasn't careening wildly overhead catching bugs, I thought it would be exciting to see one sleeping. So, armed with my camera, off I went to locate the beast. Of course, the bird was no longer there, but the trip was not a total loss. As I drove past wheat fields, scrub grass and steep canyons another bird caught my eye.
A prairie falcon was perched on a pole looking for breakfast. I slowed the car down to a crawl, readied the camera and as I rolled to a stop the bird took flight. Amazingly, I was able to snap several photos that were somewhat in focus as it flew past me and disappeared. Ah, serendipity! Suddenly, I forgot all about the nighthawk and got an inspiration for a painting with the prairie falcon. I hurried home to do a sketch while the idea was still fresh in my mind. 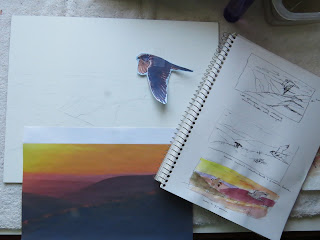 My initial idea was to have the falcon cruising over the canyons looking for a meal in early morning light. Checking my photo references I found one of a canyon I sort of liked, but the lighting was all wrong and I didn't like the way it laid out in my thumbnail sketches. I was going to need different references. Now I was on a mission. I needed the perfect canyon with the perfect light. At 4:30 a.m. the next morning I was heading out to try to catch the light at daybreak that would match my vision.

It was a very warm morning and as I wound my way up the canyon the sun broke over the horizon and I was confronted with the most spectacular sunrise!
I pulled over, snapped a few photos and continued to the top to look for my "perfect" light and canyon. As I was driving I was praying for God to help me find the reference I needed to complete the inspiration He had given me for the prairie falcon. In spite of my early departure the light changed rapidly and I searched in vain for the perfect scene. I took some photos, but they didn't meet my expectations. Finally, I gave up and headed for home a bit disappointed that I was unable to find what I needed.

Ah, but God had smiled on me while I was out there. Though I didn't realize it at the time he had given me the perfect sunrise and the perfect canyon.
Back at home I loaded the photos on my laptop and there was the beautiful sunrise I had seen. I knew instantly that this was the reference I needed to use. I had envisioned a soft, low light for the painting, but clearly this sunrise was the answer to my prayer with it's fiery colors.

Over the next few days I considered how I was going to use this sunrise with my prairie falcon. I decided to flip the photo horizontally to match the lighting in my falcon reference. I did a few more thumbnail sketches to firm up the composition, laid down some initial washes in acrylic and used paper cut-outs of varying sizes to get a feel for the correct size and placement of the bird. 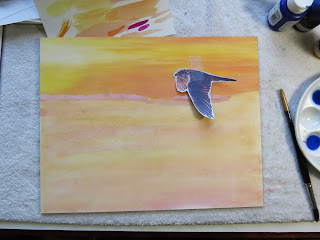 Since painting landscapes is not my strongest talent I proceeded slowly, building up color in glazes and washes until I felt I had the correct values. 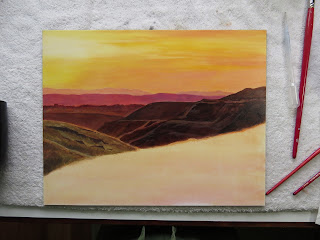 Painting this way also allowed some of the previous layers to show through which added a sense of depth and luminosity. 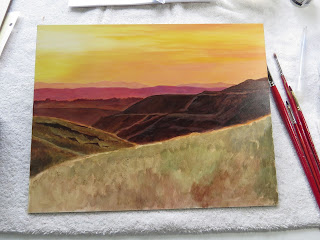 This was where I stopped this afternoon. At this point I'm liking the direction it's heading. I like the warmth that it's taking on, but I can see the colors are a little intense. I think my next step will be to use an airbrush to soften the background and give it that hazy depth of a summer morning on what promises to be a very hot day. After that it's on to the foreground, then finally the falcon and with any luck it will come close to the inspiration that was given to me.