Each spring for the past few years I have had the unique blessing of nest-watching some species of bird. I never pick the species ahead of time, but wait for the bird to present itself to me. This year I had a sneaking suspicion it might be the red-tail hawk as several of them kept crossing my path early on. Then one day in February I discovered a pair building a nest in Swallows Park, one of the parks I frequently walk in. The trees at that time were still bare and the nest was high up in a sycamore tree and easy to see if you were looking.
Over the course of the next several weeks I watched the pair bring nesting material, mate and interact with each other. Red-tail hawks mate for life, but I had no way of knowing if this was their first nest or just one of many. At any rate it seemed to take them a very long time to build it to their liking.

Finally, on March 23rd, it was move in day! Both birds were at the nest when I arrived and as I started to take photos the female launched off the nest and came low over my head, a rather intimidating sight through the camera lens as she came at me!
Then following her, the male launched and flew over the top of me circling three times before flying off. As I soon discovered, red-tails are very territorial and protective of their nest. Were these two letting me know my presence was not welcome?
As I walk in this park frequently it was easy to keep track of the birds progress. Though I couldn't see into the nest I had a clear view of it from below. By doing a little research and observing closely I was able to determine when the eggs were laid and when I might expect them to hatch. The eggs would be incubated for 28 - 35 days primarily by the female with the male taking over to give her a chance to stretch her wings. Most days there was little to see, but the female always knew I was there.
On the morning of May 1st, I observed the female standing on the edge of the nest looking in. She appeared to be feeding something then gingerly stepped back into the nest and settled down. I was fairly certain the eggs had hatched and checked again that afternoon. This time she came off the nest and joined the male circling overhead. The two birds flew together with legs dangling as when they are courting, then the smaller bird (the male) folded his wings and plummeted from the sky. Like a heat seeking missile he rocketed over my head, banked sharply and landed effortlessly on the edge of the nest where he sat looking in until the female returned. It was at this time that I got a really good look at the two birds together and discovered some clues as to who was really who. Except for slight differences in plumage color, male and female red-tails are marked the same. Males are one third smaller, but unless the birds are side by side this is difficult to discern. I had always assumed the bird I was seeing on the nest was the female, but at times it could have been the male. Now I could see that the female was darker and her breast was more heavily marked. But the best identifier was her beak. It was deformed quite noticeably with the bottom mandible too long and twisted to one side.
I nick-named her "Broke-beak" and as the days went by she and I got to know each other quite well. I also learned a lot about red-tail attitude when it came to their nest. If I got too close or looked too long she would come off her nest and scream at me. 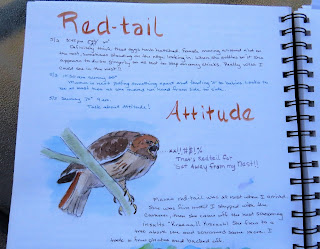 Sometimes both parents would be present and would circle above me hurling insults. I would try to hide under the now leafed-out trees, but I could see their shadows as they hunted for me. It was a bit intimidating! Even if I camouflaged both myself and my camera, they seemed to always see me and our dance would begin. They would circle and scream and I would hide under the trees. 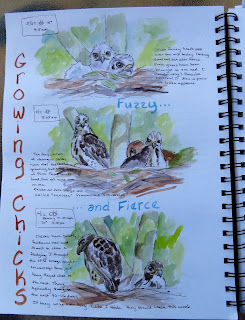 I finally saw the first fuzzy head on May 9th and while they grew rapidly it would take them on average 42 - 48 days to be big enough to leave the nest. At this young age they are called eyasses (pronounced EYE- ess-ez) and even though they are fuzzy they already have that fierce look that all raptors have. I watched to see how many chicks there would be as they can have between 2 - 5, but the nest was deep and they stayed hidden until the later stages of development. Also, the sycamore tree had leafed out and it wasn't always easy to see without upsetting "Broke-beak". Eventually, as the chicks got bigger and more active they would sit on the sides of the nest and I determined that there were two.
By the end of June the time came for the chicks to fledge. On the 21st I saw one standing on the edge of the nest, wings spread to a stiff breeze. I thought I would see it go, but it waited one more day. On the morning of the 22nd I arrived to find one chick had flown to a lower tree while the other called from the nest. Both parents were present to watch over the process, protect and encourage their chicks. But on this happy day, my presence was not appreciated and both parents told me about it. 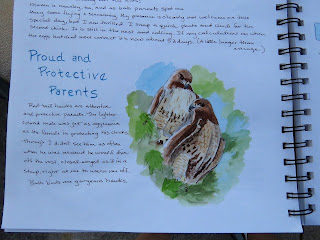 The second chick waited one more day and fledged on the morning of June 23rd. By that afternoon all the birds had disappeared from the nest area. It was so quiet! I walked all around beneath the nest and no adult screamed at me. Beneath the nest I found the remains of a few of their recent meals; a dead mouse, a partial bird, bones, feathers and their castings ( regurgitated pellets containing undigested parts). These were the only clues left indicating that the birds had been there at all. I suddenly felt a huge emptiness. For the better part of four months these birds had been a daily part of my life and now they were off to live their lives away from my curious eyes. But I was happy, too, in that I had been given the privilege of watching their life unfold before me and to this point their nesting had been a success.

I thought I had witnessed the end of the story and I wished I had actually seen the chicks fly. The story, my journal and photos documenting their journey seemed incomplete without that last piece. As much as I wanted it to be different I had to settle for what I had to that point and be grateful and satisfied. But the story didn't end there. A little more time in these birds lives was granted to me because several days later I heard the chicks back near the nest area calling for food. I was able to locate them easy enough. All I had to do was listen for them calling or if they were silent I listened for the robins squawking their alarm call letting everyone know there was a predator in the area. I learned that the young juveniles would stay near the vicinity of the nest for about 2-3 weeks while they gained strength in their wings and waited for the parents to bring them food. Then in a few more weeks after that they will be hunting on their own.
One of the last times I saw the chicks was on July 4th. I was walking in a different part of the park when I heard them calling. As I neared their location they took to the skies and thankfully I had listened to the little voice that said "take your camera today". They flew above me circling and calling giving me several opportunities for photos and I took many. In my mind they seemed to be showing me just how well they could fly, but were also telling me farewell. Then one caught a thermal and rose high in the sky as red-tail hawks are prone to do.
I smiled broadly and thought how appropriate that they should become the birds they were meant to be on Independence Day.

Posted by Catherine Temple at 11:30 PM