Lights and Darks - a work in progress 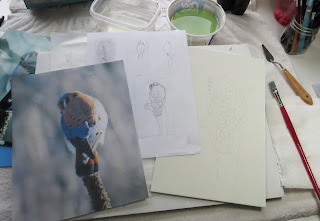 I started a new painting the other day that will feature a kestrel (one of my favorite birds!) in a more dramatic lighting situation. I have always been drawn to paintings that have some very distinct value changes from light to dark, but have never been able to capture it very well in my own work. Some of that is due in part to the reference photos I usually work from. When doing pet portraits most of my customers reference photos have had little thought given to the lighting when the photo was taken. Most have used a flash which flattens and washes out everything. While I can still make a nice portrait from those I sometimes long for something with more pop. Even my own reference photos aren't always taken with the best light. Most days when I'm out shooting photos of wildlife I'm concentrating on finding the bird or animal and the day may be cloudy or overcast, so shadows are not very distinct. I do the best I can with what I have, but it's always nice to start with a reference photo that has what you are looking for. 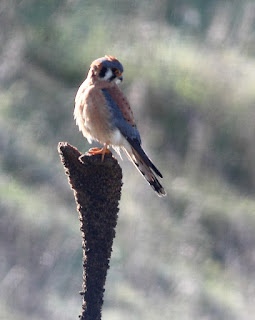 I came across this kestrel a few weeks back on a morning when the sun was still low and coming from behind the bird. I was really drawn to the sharp contrasts of light and dark. Thankfully, I had my camera and the little falcon was fairly cooperative so I was able to shoot several photos of it as it moved from one mullein stalk to another hunting for breakfast.
Back home in my studio I chose a pose of the bird that I liked, but decided to change the shape of the mullein stalk and the color of the background. 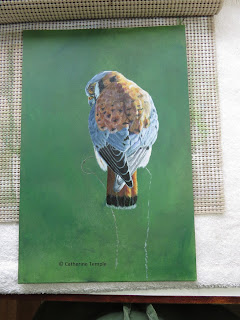 After trying several ideas in thumbnail sketches I chose a vertical crop and a dark background hoping both would make the painting more dramatic. I am trying to keep the background fairly indistinct to keep the focus on the bird and it's mullein perch, but hoping it will suggest a grassy field in spring that the kestrel will be hunting for voles, mice or grasshoppers in. We'll see how I do.
So far I think I'm happy with capturing the lights and darks, but I have a ways to go yet and it's taking longer than I thought to get the values right. I have reworked the red area on the birds back several times. Working in acrylic makes this much easier as it dries quickly, but it took longer to build up the light side as I had covered the whole board with green paint first, then transferred my drawing over the top of it. In hindsight, masking the bird or first painting the bird with a few coats of white may have saved me some time, but that's how you learn what works and what doesn't.
It's a process!