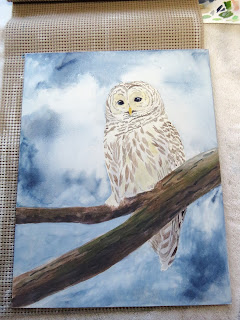 While pondering possibilities for the upcoming holidays I realized I had not yet come up with an idea for my Christmas card. At the same time it came to me that I had not done any larger paintings in awhile nor have I taken much time to experiment with new materials. I've also been in kind of a creative rut lately so it seemed like these reasons were a good excuse to just have at it and play. 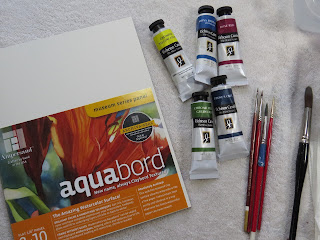 A while back I purchased some Aquabord panels from Ampersand. These panels are coated with a clay ground that is reported to be wonderful for watercolor media and once finished can be sprayed with a varnish and displayed without glass. I had also purchased some casein paints to experiment with. Casein is a water media made from milk protein. It is an Old World paint and many eleventh century frescoes were painted with it.

Armed with my new materials I chose a subject, in this case a barred owl I photographed last winter. I tried several different washes with another medium, gouache, on the background looking for something that would resemble a snowy day. When it didn't work the way I wanted I just washed it off and started over. That's one of the advantages of Aquabord over watercolor paper. You can wash off what you don't like without destroying the board (provided your paint remains water soluble when dry which gouache does).

The owl and the branch I started painting in casein, but now that I've had time to look it over I'm not really happy with how the branch looks and it certainly isn't going the direction I had envisioned in my head. So.... 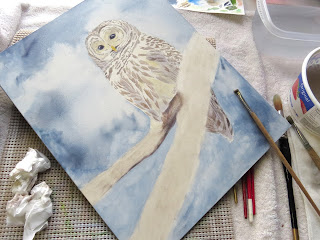 .....off comes the branch!
I had to make this decision quickly because casein only remains water soluble for a short time. Unlike watercolor or gouache which could be reworked years from now, casein will eventually become permanent.
Now that I've taken off the branch I have to figure out what else to do, which at the moment is a big question mark. I haven't got a clue. Obviously, the bird has to be sitting on something, but the big, dark branch just didn't seem to be conveying "cold, wintery day" to me. So it's back to the drawing board, literally.
*SIGH*
That's how it goes some days!
Posted by Catherine Temple at 6:00 PM